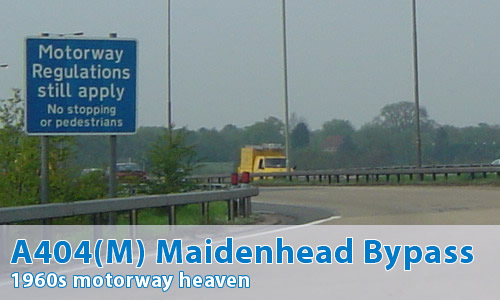 West of Maidenhead, Berkshire. It meets the M4 at the wonderfully named junction 8/9.

OK, can you talk sense now.

Yes, but this story involves going back in time.

The first section of the M4 to be built was the Maidenhead bypass. This went from what is now junction 7, around Maidenhead, and met the existing road system, back at the A4 at what is now the end of the A404(M).

When the M4 was extended to the west, it was extended from the middle of this original section, and so this bit was left over. In fact, you can see the kink in the southern end of the motorway quite clearly, both on the ground, and from a map.

Can I see some photographs of this then??

"I feel you have only touched upon the patheticosity of this beauty. Firstly, the junction numbering is hilariously wayward, 2 junctions to call its own, and they are 9A, and 9B. Still clinging to its glorious past as a bit of M4, it can't let go, a bit like a asphalt Big Brother contestant from 3 years ago.

The attachment of the A404(M) to the Junction 8/9 catastrophe further helps its case.

The biggest junction numbering dogs dinner on the network?"

Don't forget that until the early nineties, the A404(M) was known as the A423(M) and terminated on the A4 at a roundabout with the A423 carrying straight on at the other side, meeting the A404 at a crossroads a mile up the road. The renumbering took place after the A404 was fully dualled and grade separated from the M40 to here, apart from the Bisham roundabout.

This, however, in itself is the most pathetic feature of the A404(M) in that it gives up after a few miles and doesn't finish the job of getting to the M40!

The A404(M) has a fantastic blue mini roundabout direction sign at the top of the northbound off slip at 9a. Why was this junction ever included in the original Maidenhead Bypass anyway? it's substandard and with a fairly small road. However it's is not just the rubbish junctions and short length that makes it pathetic - it's the signage for it. All over the surrounding area, most of the signs, despite it being at least 12 years since the number changed from A423(M), still say A423(M) (including the start of motorway sign with a red line through the A423(M) bit). this sign for junction 9a is probably the furthest away the A404(M) is signed correctly from local roads and look how patched and ugly looking the sign is.

It seems that Windsor and Maidenhead council either weren't given any money to put up patches, or couldn't be bothered as they didn't care much for the renumbering. Oh and also, it takes the A404 out of zone (south of the A4). The A404 shouldn't be anywhere near Maidenhead anyway - it was extended over the A416 for no real reason at some point early on (pre-45). Renumbering the bit of road that is currently the A404(M) for the 4th time wouldn't take much effort to do, a bit of red tape to strike through the A404(M) bits, a couple of new "chopsticks" signs and half a dozen patches.

I think this little road has valueable uses.
1, it gets traffic from north - south and south - north without having to go through Reading or Maidenhead
and 2, It provides a link (along with the A329(M)) from the M25, M3 and M4 to the M40 without using the roadworks area of the M25.

Only downfall of it is that it doesn't make it all the way to Wycombe and the M40 to make a continuous route.

Something you have not mentioned here is that you as you approach the J8/9 roundabout, you can see where the road used to point down the old A4(M) alignment. Was quite a nice surprise to find this out when I drove it!