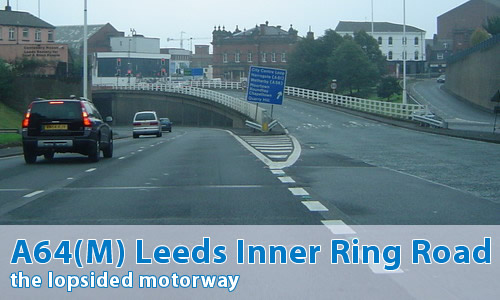 Leeds City Centre. It's part of the Inner Ring Road.

It's part of the Leeds Inner Ring road, along with the A58(M).

It helps speed traffic around the city centre, and makes the centre a more pleasant place for pedestrians.

It's an excellent example of an urban motorway.

If it's part of the Leeds Inner Ring Road, then why does it have its own number?

Simple - the A58 turns off at the junction where the Inner Ring Road changes from being A58(M) to A64(M).

So, what's so pathetic about it?

It's Britain's shortest numbered, signed motorway. A whole 0.7 miles (1km) long in one direction, and a little longer in the other, due to the sliproads on the end junction. Or thereabouts, anyway.

Eh? What do you mean?

As I mentioned, the motorway is longer heading eastbound than it it heading westbound.

Why is that then?

Well, it's really a bodge. The end of the motorway is unfinished, with the eastbound carriageway up on a viaduct, whilst the westbound one is down at ground level. The whole thing is meant to be double-decked like parts of the A167(M), but the continuation of the route towards the M621 (née M65) to the south is missing.

So, the westbound carriageway is shorter than the other contender for the title, the A308(M), whilst the eastbound one is longer.

You see, no-one seems to be quite sure just where the Leeds IRR changes from A58(M) to A64(M). Now, whilst in the grand scheme of things this really doesn't matter all that much, it's all in that title contest!

The usual place quoted where the two motorways meet is at the Vicar Lane/North Street junction. However, the A58 leaves the motorway one junction to the west, at Claypit Lane. Logically, therefore, the A64(M) must start at the point where the sliproads leave/join at that junction instead. Of course, it's a whole 650 yards (600m) or so, but when the quoted length of the entire motorway is less than a mile, it makes a huge difference!

Rather irritatingly, the signage doesn't help - though if that is the case, then the A58(M) and A64(M) are roughly the same length...

Ah, so it's well worth some photos then?

Can I see some more?

Like the A6144(M) the A64(M) has to rank as a PATHETIC motorway has all it has to show for it is that it must be the only motorway in Britain that goes in a loop around a Ring Road and that it is only 600 yards long makes makes it even more PATHETIC has it will take you around 10-15 seconds to go from start to finish on the motorway and to tell you the tuth it should never have been a motorway and it does not even look like one.