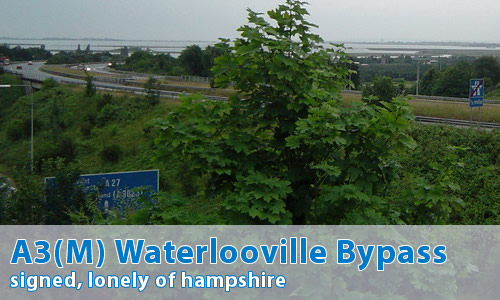 It's the Waterlooville Bypass, Hampshire.

What's this all about then?

Well, it's certainly looks like a pathetic motorway on a map. It's one of those rare motorways that connects to no other motorways - it looks a bit odd stuck out all alone.

It nearly manages to meet the M27, but doesn't quite get there.

All its junctions (except for the two ends) are with either B-roads or unclassified roads.

And people get all uppity about its number - it's east of the A3, so it's in the 2 numbering zone for non-motorway roads. Not only that, but the old A3 still exists through Waterlooville. It manages to get some people in a right lather!

Of course not - there's more important things in life to worry about!

All in all, it's nothing special. Really, it isn't. Honest.

Well, why don't you take the tour?

I'll be the first to comment as I had the idea of putting it on here. The A3(M) does have a very useful purpose. It bypasses the horrible old A3 through Cosham, Waterlooville and Horndean. That's the plus side. The down sides are more for the entire A3.

The non motorway part of the A3 are a dam sight better than the motorway bit. If you drive between Guildford and Tolworth where you meet the old Kingston bypass, you could easily think you're on a motorway. 3 lanes, hard shoulder and a quality surface. The same thinking on the (M) thinking its an A class dual carriageway. (ok apart from the blue signs).

The point about the "M27" signs is valid as it is saying that the M27 starts here where it doesn't. Although, its only the hard shoulder that's 12 inches too narrow stopping it being a motorway. so come on DOT HA or whatever you're called, sod the rules like you done on the M25, M6 and M42 and make this bit an M properly!

As someone who grew up just yards from the London end of the A3, I have a certain fondness for this road.

The A3(M) always fascinated me as a youth. I think - from memory, in the seventies - that the junction numbers were letters. Can't be sure, but I was given an old AA book in the Seventies and remember poring wistfully over the motorway maps (before I could drive) in the genesis of my fascination with roads.

I'd just like to point out that the junctions weren't actually "numbered" with letters - it was just the AA's way of telling junctions apart on motorways where there were no numbers!

The A3(M) is my favourite motorway as its easy to use, modern great bridges (take Portsdown hill for example) and the lanes are wide. It is not pathetic. The A3 has just been done up in Waterlooville and people should be able to tell between a 'A' road and a motorway. It was going to join the M27 but the section between the A3 and the M27 was not wide enough to be classed as a motorway so its part of the A27 instead. The builders probably forgot to modify the sign. The motorway is really spectacular at night with all those catseyes! So it's not pathetic, short but not pathetic.

I have to agree with the other contributors here. There's nothing really wrong or pathetic with this motorway at all. It has a proper hard shoulder the whole way, relatively good surface and provides a useful by-pass to the A3 corridor through Cosham and Waterlooville.

The only weaknesses are the restricted access to junctions 1 and 4, as well as the lack of free flowing link to the western part of the A27 (traffic has to turn off at junction five and go through a series of roundabouts).

I'm sure when I was younger the A3(M) had no numbered junctions at all, I think they only came along in the mid 90s. Also, the unclassified road at junction 4 serves a very large Asda store and B&Q, as well as large college and housing estates on both sides. That might explain why the traffic is high.

The ASDA Superstore off Jct 4 is so busy it is branded (rather grandiosely) a 'Wal*Mart Supercentre' and it sits on the border of Leigh Park, the second largest council estate in Europe! The superstore and housing estate are to the right hand side of the Jct 4 off-slip - the the left lie several more housing estates within the Portsmouth City boundary.

The comments about the southbound exit onto the A27 being listed as M27 are a bit mean-spirited. For all intents and purposes that section of the A27 IS the M27, with just two roundabout flyovers lying between the end of the A3(M) and the trumpet M27/M275 Marriott Junction. Even if you did want the A27, until it branches off to the north-west at the infamous M27/M271 roundabout (Jct 3), it runs parallel to the M27 anyway.

The A3's viability as a South Coast-M25 route has long been blighted by the infamous 'Devil's Punchbowl' section around Hindhead, where the otherwise unbroken dual carriageway is squeezed through a lethal single track carousel around a mountainside that brings everyone and everything grinding to an unceremonious halt. The long-standing plans to construct a dual carriageway tunnel under the Devil's Punchbowl should finally commence in 2007 according to the Highways Agency. When that dualled link is completed, the A3 corridor will provide a high-speed alternative to the M3 and the A3(M)'s current pathetic status may be called into question!

Nigel Mee has some news:

I confirm that work clearing the portal entrances has indeed started on the A3 bypass under Hindhead [March 2007] - completion of the tunnel itself is due to be open to traffic  by 2011.

I suggest that the A3(M) will no longer be thought of as "pathetic" once drivers can travel at 70+ mph from London/M25 to Portsmouth although the roundabout on the A3 at Liss may slow people down a bit...

I use the A3(M) every day and find it an adequate motorway.  Not pathetic except for not linking to M27 (but that is not its fault)

As has been said, the A3 Hindhead improvement is underway and the tunnelling has begun.

As regards the Ham Barn Roundabout, IIRC from the plans, that will be either removed or grade separated.

Whilst someone else has been paying attention [July 08]:

I notice today that the long incorrect signs at the southern end of the A3(M) are on their way out.  Today the engineers are onsite and constructing new signs a couple of metres in front of the old.  They're not complete yet, but from what I can see, they now correctly sign the A27 and not the M27, so hopefully people will stop exiting at junction 5 unnecessarily.  Can't believe it's taken so long.  I wonder how many people have left the road for no reason over the many years its been wrong?

Can anyone reveal why the Esher bypass section of the A3, completed in the mid 1970s is not A3(M) ?  It has three lanes each way, a hard shoulder and proper grade-separated junctions with other A-roads.  It makes the real A3(M) look like an amateur!