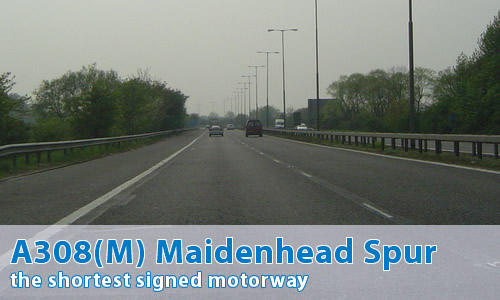 South of Maidenhead, Berkshire. It meets the M4 at the wonderfully named junction 8/9.

Erm, it's short? And just manages to go from one roundabout to another, for a grand total of 0.6 miles, or for those of you of a more metric persuasion, less than 1km.

That's pretty rubbish! So is there a story behind it to make things a little more interesting?

I knew you'd come up with something!

Seriously, the story of this motorway is all tied in with just why the motorway starts at that odd junction: M4 junction 8/9.

Why on earth is it numbered that way?

OK, when this section of M4 was built, it was as the Maidenhead Bypass. This went from junction 7, to the current J9b on the A404(M). When the motorway was extended west, it wasn't from the end, but somewhere in the middle: the present location of junction 8/9. Unfortunately, this point was too close to junction 8, and so the junction was closed. Junction 8 was with the A308, and so the A308(M) came into being to replace that closed junction. Some maps even show the junction at the end of the A308(M) as junction 8a.

Can I see some photographs of this then??

On the M4 roundabout there are signals, which it doesn't seem to need when I use the A404(M) and M4, and in front of you of you as you wait at these signals are signs saying "Motorway regulations still apply. No stopping or pedestrians." So you are told not to stop, and have a red light - what to do?

I have no idea why, when building the M4 and junction here, they didn't downgrade what is now the A404(M) to A road and have just a all purpose road to the A308/A330. This had been done at M27 junction 2, with the A36(M) being downgraded when the A326 link was added. Why not here?

On the other hand, as a road in it's own right it is very useful for bypassing Maidenhead, when used in conjunction with the A404(M), or for getting to southern bits of Maidenhead, various little settlements nearby, Windsor (from the west), or even to use the A330 and bypass the Heathrow bit of the M25. It's a useful road, it's just doesn't need to have blue signs.

Alex Richardson is fairly damning about the A308(M):

What is the point of the A308(M) being classed a motorway because it is just like the A8(M) in Ireland. On that motorway there is no junction apart from the start and the end and at the end as you say the roundabout is made only of white A roads and not Green A roads. Overall it is like the A8(M) where it does nothing for the network.

I regularly travel along the A308 from Sunbury to Maidenhead to avoid the London end of the M4. I am honoured to think I am travelling on the shortest motorway in the UK!

In reply to Alex Richardson: this road must be classified as a motorway because it leads irrevocably to other motorways. If it was simply a continuation of the A308 then non-motorway traffic would have to be provided with an exit from M4 junction 8/9 and the roundabout at that junction would have to be de-restricted. While this would then mean that the A404(M) could be de-classified as well, it's quite a lot of work for no real benefit (apart from getting rid of the stupid junction 9a and 9b numbering on the A404(M)!). It is therefore far easier to classify this road as a motorway from the roundabout in Bray Wick.

Having just written that screed, I've now realised that de-classifying both the A308(M) and A404(M) would solve the problem at a stroke, as each would provide the non-motorway traffic exit for the other from junction 8/9, turning this motorway-restricted roundabout into a bog-standard one! Your cunning plan makes sense after all...

See the wonderful A6144(M) for an essentially identical situation, although that is now de-classified due to the M60 widening and junction rebuilding; non-motorway traffic can use the new extended sliproad to get to the A56 one junction further along without ever touching the motorway."

Both spur roads were built to motorway standards. The local road system means there is adequate, if not better, alternatives for non-motorway traffic.

So overall it makes sense to keep non-motorway traffic off the roundabout, and therefore off these two roads. Keeping them both (M) is the only way of doing so.

Gary Bristow perhaps has an answer to the junction 8/9 debate:

In the late 1980s the roundabout at J8/9 was used as a drop off/pick up point by hitch-hikers. The Motorway Restictions... sign was a succesful attempt to end this practice. Changing the 308 & 404 back to A roads would allow this (mis)use to resume.

Tony Moore has noticed something:

When approaching the northern terminus roundabout on the A308 from Windsor, the motorway is painted on the lane markings as (M4) not even A308(M) so it doesn't even get mentioned by its A counterpart.