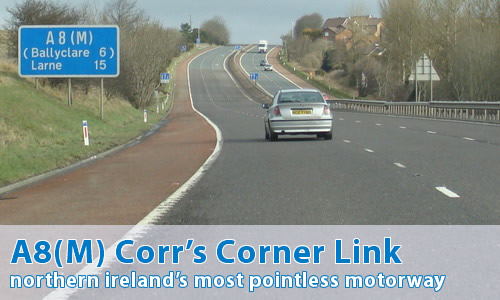 When did it open?

It opened on 24 October 1966. When planned under Duncan and Chambers in the 1950s, the M2 motorway was intended to run north-west along the route of the modern A8(M) with a spur running west to Antrim town. In 1963, as the route was being finalised, it was decided to re-route the M2 past Antrim. A short spur to Corr’s Corner was built anyway and numbered the A8(M) with motorway restrictions. Building work on all Northern Ireland’s motorways ceased at the start of civil disorder around 1970.

Well, where do I begin?

For a start, it’s only 1 mile long and only connects to all-purpose roads at both ends. At the south end it joins the Sandyknowes roundabout (M2 junction 4), a hopelessly inadequate junction only slightly improved by peak-time traffic lights. Traffic speeds down the one-mile A8(M) and then has to sit for 10 minutes at the end waiting to join the roundabout. At the other end it joins the A8 and two local roads at another roundabout. Going away from the M2, again traffic speeds down the A8(M) and then has to sit waiting to join this junction. If this had been built as an ordinary dual-carriageway, without motorway restrictions, I estimate that journey times to Larne would be increased by a staggering ten seconds! It is arguably the most pointless motorway in the UK.

But that’s not all. Across that whole 1 mile length, the A8(M) has a grand total of zero junctions: it meets no other roads between the two roundabouts it connects. The only mitigating factor is quite a pleasant arched road bridge that crosses the motorway around half way along.

The A8(M) is the main route to Larne. At Corr’s Corner the A8 becomes a dual-carriageway for about 3 miles and thereafter it reverts to single-carriageway with only one lane in each direction. The A8(M) is much too short to make any real impact on journey times and it only frustrates drivers who have to wait at the roundabouts at each end.

I have to say, though, that it is the very pointlessness of this motorway that makes it so wonderful!

Toby Speight has a question:

I see from the photos that A8(M) doesn't even have central barriers - is this normal round there?

Sam Corbett takes the time out to help:

Regarding Northern Ireland's A8(M),
the N.I. roads service made a real effort to install central barriers to all our motorways during the 90's. However, they seem to be taking their time in finishing a few loose ends, including the A8(M).

Chris Marshall has another question:

An email posted on your site from Toby asks if the lack of central barriers on NI motorways is normal. I learned when I was making up my
NI exit lists [available at www.cbrd.co.uk] that it is - the standard in NI is for an earth mound along a wide reservation, which can be seen in some of the photos.

What I want to know is if all NI motorways are built the same as the A8(M), of a width that can be marked as two or three lanes, as needed (this example is two lanes one way and three the other, sort of).

In reply to some of the questions asked about the A8(M). I was the one who sent you all this stuff if you remember!!

Yes, until the 1990s it was standard for all Northern Ireland motorways to have peat central barriers about 3 feet high which were let grow wild. This did create a haven for wildlife but had 2 problems: the soil was either so soft that it couldn't stop anything, or so compacted that it was like hitting a brick wall. Most have now been replaced by metal barriers but not the A8(M) as yet.

No, it is not normal to build motorways wide enough for 3 lanes. The A8(M) began with 3 lanes along its entire length. However the leftmost one becomes the turn-left lane at the roundabout at the north end and the roads service decided that it was unacceptable for an unfamiliar driver who wanted to go straight on to suddenly be forced to turn left simply by staying in the left lane of a motorway. So what happens is that the 3rd lane stops about 1/3 mile along. Then the two remaining lanes gently swing across the carriageway to the right hand side and a turn left lane is then opened up on the left. The unused tarmac is painted with chevrons. A much better arrangement. You can still see where the old lines were removed on the middle photo.

Update - I drove down the A8(M) at the weekend [May 2004] and realised that the barriers are now metal. They must have been replaced in the past few months because I hadn't noticed until I went and looked!

David Brown has another question about the A8(M):

What are the lights below the no entry sign on photo 2 for?

This consists of two red lights which permanently flash alternately (if you get my meaning) to give extra warning that you can't enter here. A fairly common thing on Northern Ireland motorways (and other main roads), but apparently not on the mainland as I've only recently discovered.

Just a help for the guy who wondered why there are lights under the "No Entry" sign.

I wondered this when I moved to NI, but quickly worked out why. It's to remind the drivers that you cannot go down there! Really, I'm not being ironic! There are even signs at mini roundabouts telling people "This is a mini roundabout. Give way to people from your right".

Nicholas Hogg has noticed something in the photos [March 09]:

If you look at the first photograph you can see that the footpath and crossing point for pedestrians extend beyond the point where Motorway Restrictions begins. Although there is "No Pedestrians" sign below the "National Speed Limit" sign it would be technically illegal to cross at this point.

All photographs and text in this section
© Wesley Johnston, Northern Ireland Roads Site

Used with grateful thanks.