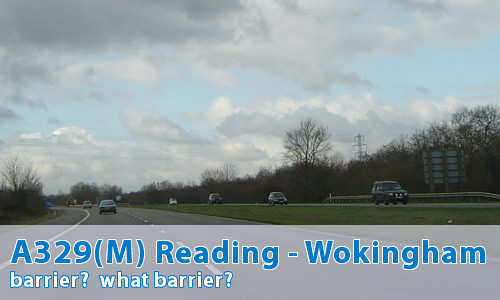 Tell me something about this then...

How about the fact that there are no central barriers for some of the route?

Yes, I know - though to be fair there's quite a big gap between the two carriageways. How about the fact that it was never completed at its northern end?

Hmm? Where was it meant to go then?

Let's see know - the southern end isn't finished either? It was meant to be part of the unbuilt M31. This also explains why the junction with the M4 is so utterly enormous.

Oh, and one last thing.

The northern section of the motorway is no longer a motorway - it's now the A3290.

Well, it's so that Berkshire County Council (as was) could stick a bus lane onto it!

Although the bus lane only exists for a few hundred metres...

I've got to see this one!

Des Howlett sent me an email talking all about the A329(M):

Some history that I know of: When I moved into the Reading area in 1987, the southern end was an at-grade roundabout although it was clearly built with provision for a proper GSJ. My 1991 atlas shows that the flyover had been completed so it must have been sometime in those 4 years – I remember it happening, but not the date. If you drive south along the road, the overwhelming impression is that they’d intended to make it into a Bracknell bypass and take it down to the M3 – with few exceptions there’s almost nothing in the way – because of the extremely tight bend immediately after the motorway ends. [Of course, this is true - see the M31 for details...]

The northern end came at about the same time (from memory) in that they built a flyover and the entrance to the business park. The ending of the motorway in a couple of roundabouts was pretty stupid, but they would change that when the final phase came.

That extension was to be to take the road into the centre of Reading, right beside the railway station, ending on Vastern Road. The infamous video of a Talivan parked illegally (http://www.makingsuccess.com/talivan/) is on the hatching for the ramps for the flyover at the western end of the A329(M) extension – I’ve tried to sketch it on the map, but am no artist!

There were also plans to make a junction so that we could have a proper river crossing and to come out on the A4155 Henley Road somewhere (or maybe even continue further north towards the M40). If you live south of the Thames as I do, there are basically 4 places to get north: two heavily congested bridges in Reading (one is just by the extension’s terminus); a tiny crossing in the village of Sonning which is single-track and controlled by traffic lights; and the toll bridge at Whitchurch.

So why didn’t it happen? I remember reading at the time (but cannot find any links to this on the web) that it was scuppered because of the fact that it had to briefly cross the river and back again to avoid the gas holders and railway lines. This is important because Reading is only just in Berkshire and for about 200-300 yards of the project the road would be in Oxfordshire. Oxfordshire County Council said “no” and that was it – the whole thing was dead. [Political comment: you’ll appreciate how little effect that decision had on the people of Oxford compared to the people of Reading…]

Today, there’s a Tesco’s supermarket and a load of flats along the road (white on the map) that leads from the river at King’s Meadow down to Vastern Road so it’s nigh-on impossible to complete. It’s a shame because the road and river bridge are needed even more than ever now, 10 years on.

The downgrade to A3290 came about very quietly a few years ago. There were two north-bound slips from Winnersh in the early 1990s. Apparently this was a left-over from when they built some houses in Woodley on the old aerodrome site and changed the road layout. Anyway, in the mid 90s the northern of the two slips was changed so as to be an on-slip for park & ride buses only. Several years later, the powers-that-be decided that, because of the congestion at the A4 junction (which is a knock-on result of the failure to complete the motorway), they needed a bus lane. To do this, they stole a bit of hard shoulder and so the whole motorway back to Winnersh had to lose its status. Having said that, there are still signs saying “no pedestrians etc.” just after the end of motorway signs and all the hard shoulders have been hatched over and marked “no waiting” so it’s a motorway in all but name. I suppose that it’s only really significant if motorway and dual carriageway speed limits are different at sometime in the future.

If you drive along the whole length of the road, the part south of the M4 was clearly built as D2 all the way. It’s only the bit to the north that could accommodate D3 or even D4 with ease. I presume that’s got something to do with the extensions again.

One final thing is over the crash barriers. They have (fairly recently) put some up in the middle on one section around the Winnersh junction. At that point there is are two huge bridges – one for each carriageway – although it’s not really that obvious when you’re up there. If your car crossed the central reservation at speed, you’d barely notice the gap, but probably not so on a motorbike (a horrible thought as it’s a fair drop onto the road below) so barriers got put in to protect that small section. We have incidents every couple of years or so when someone does make it across the grass in the middle of the motorway, but thankfully these are fairly rare events.

Your comments on the A329(M) are correct but I thought I could help you amend some of the comments as this is the closest motorway to my house in Woodley and I have lived in the town all my life and saw the motorway being built.

The motorway was built in 3 stages. The first was opened in 1973 and was the section from the Winnersh / Woodley junction over the M4 to a temporary junction on the A321 just to the east of the M4 junction 10. The 2nd section between the Woodley / Winnersh junction and the A4 at Suttons Seeds was due to open at the same time but was delayed by 12 months due to the collapse of the River Lodden viaduct during construction which unfortunately killed 4 construction workers. The final section between the A321 and A329 at Coppid Beech was built in 1975 and is of a different design to the other 2 sections as it does not have the very wide central reserve.

Has no-one else noticed that when you go southbound towards the A329(M) there is no start of motorway regulations sign? The only indication that a motorway is ahead is from a junction sign further up along the A3920.

I suppose that when the northern part of the A329(M) was downgraded to the A3920 someone forgot to move the chopsticks sign!

An anonymous contributor writes [May 08]:

I think when they downgraded the Reading bit into the A3290 they were doing the right thing. I mean, at the former terminus, you either have to turn of a quick sliproad onto the A4, or head on to some 'Thames Water' place. Since when did motorways terminate on un-classified roads?

I understood that the north end of the A329(M) was intended to run over the Thames and turn west (as on your map) then parallel to the north side of the railway in Reading itself, forming the north side of Reading's Inner Distribution Road. It would then head westward through the slummy area of Cardiff Road out to the Oxford Road, joining the A329 near the old sports stadium (now Waitrose).

One notable feature of the existing road is that it was built with enough space between the carriageways (notably including over and under bridges, especially the M4 junction) to add a third lane. Now there's a novelty: planning ahead by buying enough land to widen the road at a later date using the middle of the road!

Of course all these grandiose plans came to nought with the oil crisis of 1973 (deja vu anyone?), at which time an M420 or A420(M) (including Swindon to Oxford) also got knocked on the head.

Whilst this is another contribution [Nov 08]:

Des Howlett said "There were two north-bound slips from Winnersh in the early 1990s. Apparently this was a left-over from when they built some houses in Woodley on the old aerodrome site and changed the road layout." I found proof of this in a late 1970s OS sheet (that is in possession of the Berkshire Records Office) showing the junction as a trumpet (and no B3270 - it seems that this was built later).