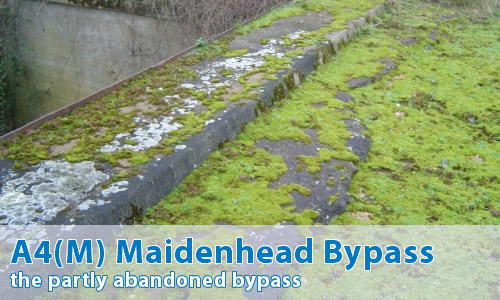 Well, it's not actually anywhere.

I get it. Where was it then?

Bypassing the town of Maidenhead, Berkshire

Maidenhead? Isn't there a load of little motorways there?

I certainly can, although an aerial photo show the whole thing in a much better way...

The section of motorway between the present northern end of the A404(M), and M4 Junction 7 was originally built as the Maidenhead Bypass in 1961. Then it was extended when the Slough Bypass section to the east was completed in 1963.

The Maidenhead Bypass opened as part of the M4, but it was a last-minute thing. Pretty much up until opening date, all Ministry documentation that refers to the Maidenhead Bypass either does not use a number, or uses the number A4(M). The rather sudden nature of the change is shown up by contemporary commercial mapping, which uses the A4(M) number almost exclusively. Some mapping still uses the A4(M) number several years later...

Perhaps oddly, it was always the intention to extend the M4 westwards from partway along the Maidenhead Bypass - though not from the same place. The original plan was to strike out westwards between the two junctions of what is now A404(M) and head north of Reading. This plan was, as might be expected, not exactly terrifically popular with the people on the posh side of Reading, so eventually the motorway was constructed to the south of the town instead.

The abandoned section is split by the A308(M), and the northern section is not accessible by the public. The southern section, however, looks something like this...

Can I see the full version of the map above?

Yes, thanks to Simon Davies.

They can be found on the Comments Archive.