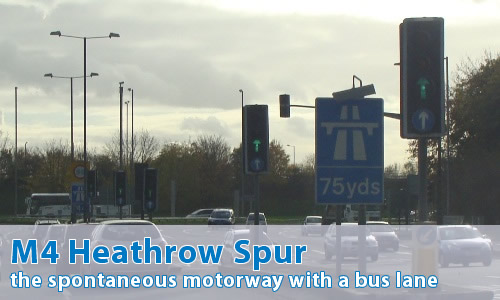 I'll give you two guesses.

Yeah, I guess that was a dumb question.

Glad you realise it!

Surely we're not going to end up with a load of little same-numbered spurs on here are we? I mean, there's loads of them around the place, and they're all pretty dull, aren't they?

Well, no, we're not. Don't worry about that. Most of the little spurs dotted around the place are, as you say, pretty dull. This one is just a little bit special though.

Just like the majority of same-numbered spurs (and unlike the M56 Manchester Airport Spur), what you see is all that was planned, and indeed it's hard to see how anything else could have been in anyone's minds, other than grade-separating the junction at the southern end so that it flows smoothly into the airport access tunnels.

So, what's so special then?

Well, there's just one or two unusual features to the Heathrow Spur.

Firstly, it's unusual in that it nearly managed to get its own number. In the two competing draft systems of motorway numbers, the Heathrow Spur was given its own draft number - M44 in the one system, and M30 in the other (although M32 was also tentatively mooted). Eventually, of course, it was decided that, in contravention of the convention (try saying that after a few beers!) that motorway spurs of over half a mile in length should have their own numbers, the Heathrow Spur should be part of the M4.

That's one thing. Name another.

It's got some unusual Driver Location Signs. You know, those blue signs that are every so often down major motorways these days that say something like "M4 A 76.5".

Well, the ones on the Heathrow Spur have an extra bit on them, so that they say things like "M4 A AS4".

How about something less geeky?

How about it's the only same-numbered spur in the United Kingdom that goes in both directions away from the parent motorway? If you look at all the other examples where a spur, even with a flat roundabout in the middle, goes both ways such as M271 or A627(M) they all have their own number. The A601(M) in Lancashire shows this off perfectly - simply a same-numbered spur of M6 until it got an extra bit going the opposite direction from the parent to the original, and then voilà, a brand new motorway number all of its own.

Now, to be fair, the northern part of the Heathrow Spur is tiny - it's probably the squarest motorway in the county, being pretty much as wide as it is long, but that's not the point, is it?

I suppose not, no.

There's also a strange section of road up at the far northern end of the Spur. As you head towards the motorway, you get a large "chopsticks" sign with "75 yards" underneath it. Now, either they're telling you that there's a motorway called "M75 yards", which is a bit too M6 Toll for my liking, or there's a bit where you can only get to the motorway, but it's not a motorway itself. It's an example of what we like to call a "spontaneous motorway", where technically L-drivers, cyclists, moped riders and all those other people not allowed onto a motorway can get to, but then they have to suddenly stop, to live out the remainder of their lives stuck fast, with no hope of escape or parole. Or something like that anyway.

Of course, the answer to why that situation arises is a little more dull. The motorway just starts where it always did, but originally the junction at the end was a simple roundabout. The roundabout has, of course, been slowly butchered so that it's barely recognisable as one, including two "straight through" paths that cross the original central island. This means that you "short-cut" the roundabout, but end up in the same place as you would have done when you join the motorway. If that lot makes sense!

And finally, something else unusual. It was the location of the first bus lane on a UK motorway.

Hang on a minute, I thought that was on the main M4!

Yes, that's the common thought, as it was the first one to come to widespread public attention. The Heathrow Spur bus lane came into effect in 1997, whilst the M4 mainline bus lane arrived in 1999.

In one way it's a bit less controversial than the one on the main M4, and in another it's more.

Well, it's less controversial because an extra lane was added to the Spur when the bus lane was added, so there was no reduction in roadspace available for other vehicles - which isn't the case on the main M4, though things aren't as bad as they seem there.

However, the controversial bit is right at the southern end of the Spur, where there is a "bus gate", or in normal person's terms, a set of traffic lights specifically to stop all other vehicles so that buses in the bus lane get priority over everyone else. It doesn't seem all that necessary to me as there's still four lanes at the roundabout at the end, so there's no big crush to get into less lanes than there were. Perhaps there's lots of buses that come down the spur from the M4 that don't want to go to the airport at all, but left towards London on the A4?

Well, why don't you take the tour? Alternatively, you could always take the StreetView tour...