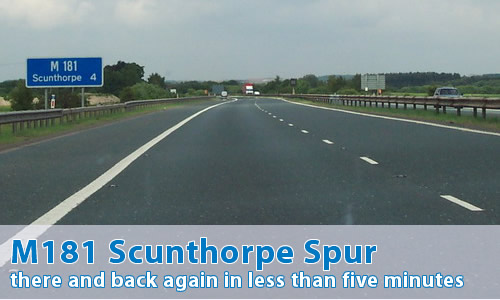 It leads from junction 3 of the M180 towards the town.

When was it built?

OK, it's only about two miles long. And it's in the middle of nowhere. And it's just an overgrown sliproad. And it's pretty much dead straight.

So, it's pretty pathetic then?

Yes, it is. Although it does manage a massively over-ambitious junction with the M180: delusions of grandeur, if ever I saw them.

It's a fantastic road! It's the fastest way out of Scunthorpe!!

Is Scunthorpe really that bad?

The M181 is truly pathetic, no more than a slip road into Scunthorpe, although it would have once served the steel works. It also connects the M180 with the A18, now a shadow of its former self with its traffic taken by the M62 on the north side of the Humber and the M180 on the south.

I was talking to a friend of mine in Brighton the other day and found out that he used to live in Scunthorpe (poor man!).

Naturally, I mentioned the M181. He has a theory that the only reason it has a number is because it would, if it had no number of its own, be quite confusing to have the M180 going in three directions (Grimsby, Scunthorpe and Doncaster).

Yes, we have spurs without numbers in a few places, then you've got the Walton Summit Motorway, but giving this spur a number sounds like a piece of good thinking.

The M181 has been flattened out recently by means of shaving off the ridges caused by the subsidence and re-paving them. Chiropractors throughout the area are rumoured to be devastated.

Evidently the council wouldn't spring for resurfacing the whole road, however, and only repaved the ridged bits. The Southbound carriageway is now one of the *scruffiest* motorways in the country as well. Hurrah

I travel down the M181 everyday to work and agree that it has to be one of the most pointless motorways in the country. Thankfully it's not quite the rollercoaster rise it used to be.

However, whether it stays a motorway for much longer is a big question. The local council plan to build a large housing and leisure complex on land to either side of the M181 called Lincolnshire Lakes. As part of this they plan to de-trunk the M181 so that access to the new developments can be made from it. More details here on page 4.

Is M181 doomed to become another lost motorway?!