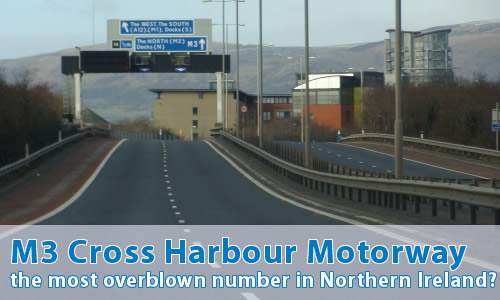 It's in Belfast, Northern Ireland, crossing the boundary between County Antrim and County Down. It's just south of the Titanic Quarter, if you're into maritime history. Or awful Hollywood movies.

What's this doing in here then?

The M3 is a tiny motorway running between the M2 towards Derry and the A2 towards Belfast City Airport. It's pretty much a river crossing, and that's it.

Even more damning, its a straight extension of the M2 - you literally drive straight on between the two motorways, and if you're not paying attention you'd never notice that the number had changed. All in all, it's a bit ridiculous having a separate number all of its own.

Surely there's got to be a reason for it?

In the 1960s, the Northern Ireland Government had some big plans for motorways, which considering that the population of Northern Ireland is relatively small were quite amazing. A start was made on the programme, which was then comprehensively binned when The Troubles escalated and the United Kingdom government dissolved the NI parliament in 1975. At that time, the M1 and M2 were the only long-distance motorways with any real completed length, and even the M2 was in two sections - a situation that still exists today.

So, the plans for an M3 motorway heading east out of Belfast towards Bangor (and the M7 towards Newtonards, which would have left the M3 near City Airport) were put on hold indefinately. Meanwhile, traffic levels over the existing river crossings, especially the Queen's Bridge and Queen Elizabeth Bridge in Belfast grew, and congestion through the city streets became worse and worse, until finally the High Level bridge over the river was resurrected, tying into the A2 Sydenham Bypass. Of couse, this section was originally proposed to be part of the M3, and so despite the fact that in any sensible world the new section of motorway would be simply numbered as an extension of the M2, the historical proposal seems to have taken precidence.

Yes, absolutely. There's no doubt that the M3 is an essential part of the NI roads infrastructure, but the use of the number is just, well, silly. There's something even sillier, though?

Well, if you're heading westbound over the bridge, you almost immediately come to the point where the M3 and M2 meet. At which point, straight ahead is, as you might expect, signed to the M2. However, this is where it gets silly - the exit to the A12 Westlink is signed as being M3! Yes, that's right - "M3 The WEST, The SOUTH". Sounds really important, doesn't it? Of course, what actually happens if you follow the rather grand signage is that you head down the sliproad to be met with "end of motorway" signage and a massive traffic light controlled junction...

There's even something similar at the other end of the M3. At junction 1 (grand, eh?), straight ahead is signed as "M3 City Airport, Bangor, Newtonards". In reality, the motorway ends in a few hundred yards. It's as if the Northern Ireland Roads Service (bless their cotton socks) are desperately trying to justify the M3 number...

Oh, and did I mention the junction numbers?

Let me see some photos!