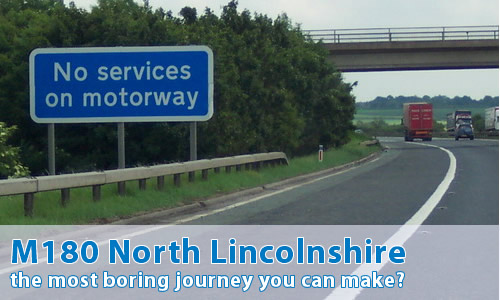 Jim Aitken comes up with a fascinating "get out clause" for the M180:

Just a brief note about the M180. Having lived in that area all my life I couldn't agree more about it being a pathetic motorway. However, my grandfather, who was a borough engineer, used to take me to see it being built when I was very small and I always wondered why it ended at a mound of earth - he always used to say that it was twenty years too late but I never knew what he meant.

Some years later, while I was studying town planning at university, my lecturer mentioned that a new town had been planned during the 1950s at Barnetby Top to cater for an expected massive expansion in the chemical and other industries and the ports of Hull, Immingham and Grimsby. It was never constructed, mainly because the expansion never happened to the degree expected. The chronology would tend to agree with my grandfather's comments and the existence of a proposed new town would certainly explain why the M180 and the Humber Bridge/A15 met in an apparently random place.

Just read your account of the M180 in the pathetic motorway section. While I agree it does sometimes seem rather empty of traffic - even at rush hour - the journey along the section between junctions 2 & 3 has been made a lot 'quieter' and less 'mind-numbing' now that the 6 lanes have been resurfaced with proper tarmac and not that crappy orange concrete.

I live in Scunthorpe and can remember when the road was built there was a sign on the westbound carriageway just after the Trent flyover that read Temporary Road Surface. This was where the orange concrete started - the 'temporary sign must have stayed there for nigh on 20 odd years!!!! Now we have continuous tarmac until you get to the A180 - now that is a crap road - noisy, straight and basically a road to no-where.

Alex Richardson has a theory regarding the M180:

I must defend the M180 because first the M180 is the only other motorway as well as the M181 to run into Lincolnshire (North Lincolnshire to be exact) and second it makes a good road in the need that the humber bridge has to be closed to high sided vehicles because it would have to go around via Goole and Third if it was still the old A18 that carried the all those lorries there would be jams on it. This bit is for you. If you look at your maps you will find that the M180 and the M181 was built at the same time as the Humber Bridge in the 1970's so my idea is that the planners took this into account in case that the bridge would have to close and that it could carry the extra traffic.

I drove to Cleethorpes a couple of months ago and so did the whole length of the M180, such as it is. It has to be said that it's an efficient motorway, but doesn't even do the job it half fulfills, as Immingham Docks are on a spur from the A180 expressway, the A160, and the end of the motorway is a few miles short of Humberside Airport.

The difference between the M180 and most of the A180 is absolutely minimal, so one wonders why one bit got the M designation and the other didn't or vice versa. My theory is that it has to do with the Humber Bridge: the M180 ends at the southern end of the A15 Humber Bridge approach, which was diverted along the M180 from junction 4 to 5. The Humber Bridge is a perfect example of a European white elephant - look at the many similar only partially necessary bridges in the Netherlands for example - and it was responsible for the creation of the east Yorkshire/north Lincolnshire motorway network as a fast way to get from nowhere to bugger all.

I just read your page on the M180 - and i have to completely agree with you that it is a truly pathetic motorway - mainly because it decides to change the colour of its signs in the middle of nowhere, and also because it has no services to speak of until close to the beginning, but only bothers to tell you about 20 miles later

1 Without this motorway there'd be absolutely no way to get out of the North Lincolnshire area very quickly at all - not very nice, especially with all these trucks having to go through these quiet country roads

2 This is the only real way to go from of the Grimsby area to get anywhere else - notice me using the term "Grimsby area" because there are so many other things stuck to it that it does make quite a large town...

Elliot Day has some positive words to say:

Having racked up many miles on this deeply dull motorway I can safely say the only interesting feature is the slight ridge one drives over after traversing the bridge on the way to Immingham. Those of you who have been on this motorway will know what I mean! It staves off drowsiness for at least another 30 minutes. Alas there are no such joys on the return journey. Still looking out for police cars on bridges is usually the done thing as one speeds along the motorway in search of the far more noteworthy M62

I was in the area very recently so I thought that as I had some time on my hands I would check this out.  I joined at the Humber Bridge end (where a nice lady who took my toll apologised when she gave me my change that she had run out of fivers) and followed this back to the M18.

Dullerama is a word that leapt to mind.

One other thing surprised me - this being a spur motorway with (mostly) three lanes, the motorway it spurs from to the south (the M18) is only a two-laner???  Seems a bit crazy to take three lanes (M18) to the north, combine it with 3 lanes from the east and have only two lanes heading south.

Suggested theme song for the M180 - "Road to Nowhere" by the Talking Heads - well it seems like it when driving along it!