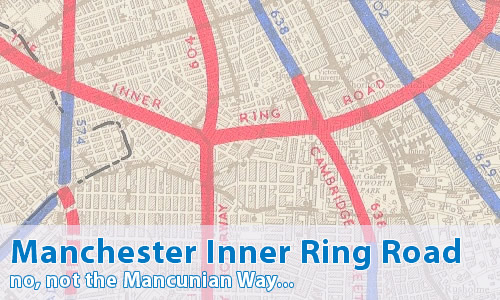 Right, let's take this from the top.

I take it that this is nothing to do with the Mancunian Way then.

You're not making any sense as usual.

Nowadays, the Manchester and Salford Inner Relief Route is complete. It forms a ring of Manchester city centre via the A57(M) and A635(M) Mancunian Way, Great Ancoats Street and Trinity Way. It's mostly dual carriageway, that crashes into traffic lights every 25 yards, other than on the motorway section. As city centre ring roads go, it's not too bad I suppose - it's better than trying to work your way straight through.

It is, however, far smaller and less useful to traffic than the real Inner Ring Road...

As you might guess, the plan for the Inner Ring Road was for an urban motorway encircling the city centre, and crossing the river into Salford. It would have formed the hub of the south east Lancashire motorway network, and have been the terminus for motorways such as the M67 and M601, and was designed, as you might expect, to cater for traffic wishing to move around the city centre and back out to another radial route.

It differed from the Intermediate Ring Road, which has been partly built on the eastern side as A6010 Alan Turing Way, which was for local traffic to move between the surrounding districts, and the Outer Ring Road, which was to take care of long-distance traffic that had no business with Manchester or Salford, and wished to avoid the two cities entirely.

The three Ring Roads all appear in the 1945 City of Manchester Plan, although the Inner Ring Road at this stage was a dual carriageway with flat roundabouts. By the time of the 1962 SELNEC Highway Plan, the road had become the variant described here. It was still sticking around in 1972, but it was firmly on its last legs as the death-knell sounded on April 1, 1974 when the new Greater Manchester Metropolitan County Council was formed, and didn't take long in shredding the file marked "Road Plans".

So, if this is nothing to do with the A57(M) Mancunian Way, what's that all about then?

There is a slight oddity though. So far, very few commercial maps have turned up with the Inner Ring Road marked on them. However, the only one in our possession is an A-Z map from the early 1970s, that shows parts of the Inner Ring Road. Even more oddly, they exclusively show parts of the southern section, which we know was planned to be the last section built...

So what route would it have taken?

Let me show you the relevant Might Have Been Map page!

Heading clockwise, it have crossed the former Pomona Docks at the Manchester/Salford boundary, and headed roughly northwards along A5066 Oldfield Road. There would have been a junction with A6 Chapel Street/The Crescent, and crossed the River Irwell roughly at the site of the weir. It would then have met the M601 on the northern side of the river. It would have then headed east, again along the northern bank of the river before crossing into Manchester near Strangeways prison, passing to the south of the prison before meeting A665 Cheetam Hill Road just to the north of Victoria Station before turning southeast with a bridge over the railway, and then diving down underneath A664 Rochdale Road before following an improved Great Ancoats Street.

The improved section of Great Ancoats Street to the south of the retail park is right on the line of the Inner Ring Road, following it up Pin Mill Brow, and then Chancellor Lane before heading southwest to meet the A57 Hyde Road (later M67) and A6 Stockport Road just behind the Apollo theatre. Then across a bit more, just to the south of the junction between A34 Brook Street and A5184 Plymouth Grove and passing between Manchester University and the Manchester Royal Infirmary, roughly down the line of Grafton Street and Dilworth Street before meeting A5103 Princess Road at the Greenheys Lane junction and turning northwest. Its final major junction would have been at the site of the present A56 Bridgewater Way junction with A5014 Chester Road, where it would have met the original M60 on its way out to Altrincham before heading back to the former docks.

That's complicated. Is there any evidence today of the road?

Absolutely. Taking the route as outlined above, the first "clue" is the rather large junction between Oldfield Road and A57 Regent Road. Whilst it's just a bit oversized, it's worth taking a look around the junction site, and noticing firstly that the housing just to the south of Regent Road is all from the 1980s, and the large supermarket in the northeast corner of the junction was built around 1990 in previously cleared land. Following Oldfield Road north, it's quite obvious that there's massive areas of land just to the east that are cleared, or that have 21st century construction on them.

Heading further north, the A6 at The Crescent is massive. I mean, it's enormous - despite Salford City Council's desperate attempts to narrow it as much as possible it is still fundamentally three traffic lanes wide in each direction. And then as you head towards Manchester, it suddenly turns to utter rubbish - narrow and claustrophobic. Guess where the transistion point between the two is? Yes, you've guessed it, at the Inner Ring Road that isn't there.

The site of the junction between the Inner Ring Road and the M601 is now full of 1980s housing in tight quadrants and narrow streets that seem to be total out of character with the surrounding area, whilst the entire north bank of the Irwell has been cleared.

The next pieces of evidence are just to the south of Victoria Station. Most of the eastern side of Miller Street has been cleared (and is now car parks), whilst the retail park on Great Ancoats Street uses space cleared for the Inner Ring Road. Heading further south, the extreme southern end of Great Ancoats Street is massive, and indeed are right on the line of the Inner Ring Road, which has a large open space to the east of Pin Mill Brow just waiting for it.

The road then seems to disappear, but there is a rather odd linear feature on the map between Greenheys Lane West and the A56 Bridgewater Way/Chester Road junction that appears to be right on the line of the eastern edge of the Inner Ring Road. It looks like a remnant from an old street layout, but it doesn't seem to match any of the historical mapping. Take a look at SABRE Maps, and see what I mean...